Following on from a previous post discussing the Analog Devices AD587 precision 10.000V voltage reference, I built a portable device to utilise the chip.

Some requirements of the project were:

A low battery indication was a desired feature to prevent the device being used in an important test and the battery level drops low and compromises the AD587’s performance. A simple green LED will suffice. Output performance of 10.000V (± 5mV) couldn’t be compromised so there is no protection to prevent high current draw from the chip, I’ll just have to be sensible.

How the circuit works, the IN4004 diode provides reverse polarity protection in the event the 18V of battery supply is incorrectly installed. The AD587 is always powered when the switch is on. 10V is output from the AD587 and is connected to an output terminal whilst a 1kΩ 0.1% resistor allows for 10mA to be generated from the 10V.

U3 is a 1N4741 11V Zener diode and when it is reversed biased with greater than 11V it begins to conduct. The 680Ω resistor, limits the current flow through the Zener diode to prevent the Zener’s destruction. Additionally, the 680Ω resistor provides a voltage drop that is the difference of the supply rail and the 11V of the Zener. Voltage across the 680Ω resistance provides the voltage to turn the BC547 transistor’s base on. That is, when the voltage across the transistor’s base and emitter exceeds ≈0.6V (remember that the base to emitter of  transistor is essentially a diode), current can flow through the BC547’s collector. R4’s function is to limit the base current through the BC547 to prevent its damage.

When the BC547 is conducting, current flow through the LED is limited by the 16.2kΩ resistor and the LED illuminates. Provided the combined voltage of the 2x series 9V batteries is greater than 12.2V (the sum of voltage drops across the IN4004 (≈0.6V) + IN4742 (11V) + transistor Vbe (≈0.6V)) then the indicator LED will illuminate. If the LED fails to illuminate, then it is a good idea to replace the batteries as the supply voltage will be getting close to 10V. 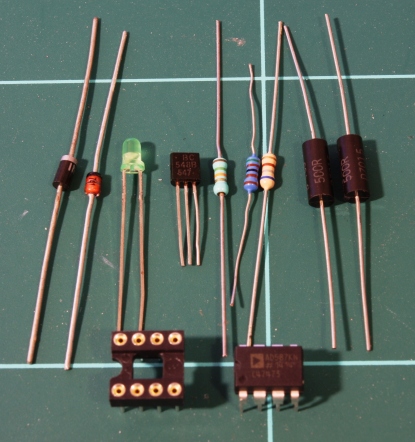 Electronics components required. (Note that 2x 500R 0.01% resistors are shown on the right)

Components were assembled on a small piece of prototyping board as per the schematic. (Note, I didn’t have a 1kΩ 0.1% resistor, but I did have 2x 500Ω 0.1% instead)

A narrow circuit board allowed the circuitry to neatly fit inside a small housing with 2x 9V batteries. A diecast aluminium housing was used as this provides some shielding, robustness and a chance to experiment with etching front panel designs. More details to come on how the aluminium was etched.

Circuit board attached to a standoff secured with epoxy

Once everything was wired and checked the lid was closed.

Overall, I’m pretty pleased with how it turned out. It is compact, has a nice robust feel and the etched front panel was a good first attempt.

Coming soon, details of testing the device as well as how the aluminium front panel was permanently etched.