New Scientist recently detailed the construction materials for the simplest flex sensor I’ve ever heard of – a graphite pencil and a piece of paper. It is obvious when you think about it, but as New Scientist details in in their article Pencil lines as sensors, 21st March 2015 (No 3013) edition,

“MacGyver would be proud. Drawing a rectangle on a piece of paper with an ordinary pencil can create a sensor.”

Researchers have detailed the results of their experiments in their paper titled Flexible and Highly Sensitive Strain Sensor Fabricated by pencil Drawn for Wearable Monitor for the journal Advanced Functional Materials.

The researchers claim that as the lines of graphite drawn on the paper bend as the paper is flexed, the resistance of the graphite line increases and decreases. Intuition would seem to agree, so I gave it a try myself.

Without complete access to the researcher’s journal article, I just made a u-shaped, heavy line with a 4B pencil that was about 100mm long by 15mm wide. On the right are two large “pads” which I would clip some alligator clips to. Then, a multimeter was set to ohms to measure resistance. (The photos in the sequence below are all sequential – check the file names.) 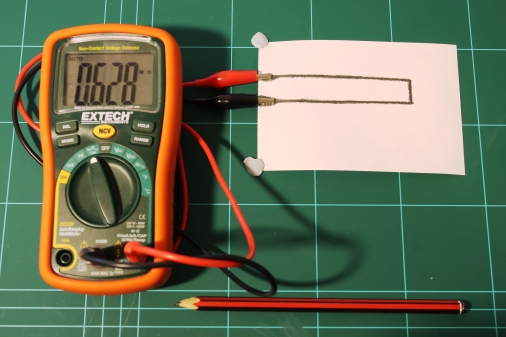 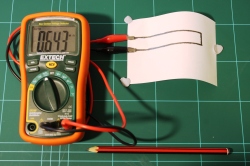 The researchers claim that with their simple sensor, they are able to determine the sensor’s angle of bending – this seems likely.

An obvious application of this technology lies in wearable devices. Another advantage is that paper is a cheap and recyclable material.

Anyway, an interesting concept. Certainly, a very simple solution for any person needing to measure if a surface is bending and is unable to use existing strain gauge sensors.