Embedded within the Da Vinci extruder nozzle is a small temperature sensor.

The obvious function of the sensor is to measure the extruder’s temperature. However, I’d like to know if the Da Vinci printer uses this temperature sensor as feedback to control the heating of the extruder or whether the sensor just functions as a safety cutoff.

To understand the properties of this sensor some investigation work was undertaken. The consensus on the internet is that the sensor is a thermistor but there are few details other than that.

With a few spare components some details about the thermistor have been determined. The process that was undertaken to gather these results is detailed.

Attempt 1 – Measuring whilst in service

The initial thoughts were to measure the properties of the temperature sensor whilst it was in service. So, using a spare JST plug and socket, a small temporary cable was made so I could insert a multimeter in the circuit without having to damage the thermistor connection.

Using IC-test-clips, a multimeter was able to be inserted in parallel with temperature sensor.

Next the small test lead with IC clips was installed in the printer. 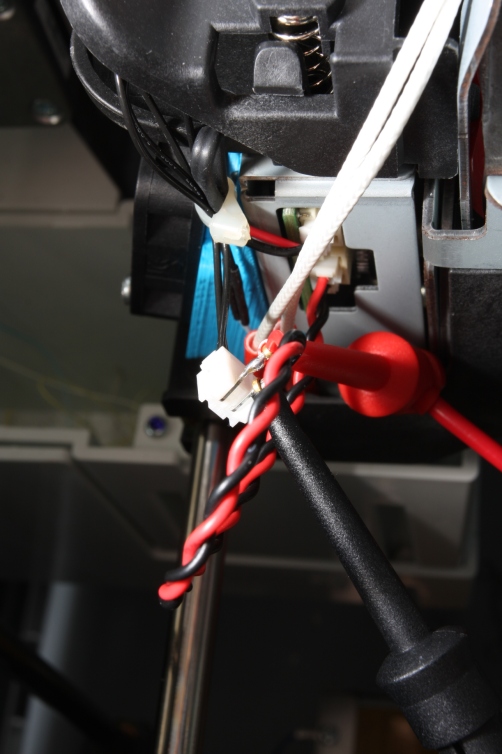 Anyway, it dawned on me that it is not appropriate to measure the resistance of a device whilst it is in operation and it wouldn’t work. Why? The extruder’s measuring circuit would likely be calculating the thermistor’s resistance by measuring the voltage drop across the thermistor. By adding a multimeter in parallel, a second voltage is being placed across the thermistor and this would interfere with the extruder’s measuring circuit and cause the multimeter to be interfered with. Anyway, pretty stupid move.

An example is shown below. A 270 ohm resistor has been substituted for the thermistor and the extruder’s temperature is shown to be 227 degrees Celsius.

Only the measurements for the extruder when it is in “hot” range are shown in the above graph. However, all the recorded data is stored in a spreadsheet that can be downloaded for your reference – Extruder_data_rev1 . You’ll find that the data suggests that the ambient resistance of the thermistor is 100k ohm.

Analysis of the data confirms that the Da Vinci 1.0’s extruder temperature sensor is an NTC thermistor.

For more ways to improve your Da Vinci prints, check out the Tips and Tricks page.