This weekend just gone I visited the Powerhouse Museum in Sydney. Currently, there is an exhibit of several Egyptian Mummies from the British Museum’s collection. The exhibition wasn’t too bad and there were plenty of amazing bits and pieces on display. (The British Museum has “acquired” quite a collection of Egyptian antiquities).

Personally, I don’t quite get the appeal or understand the need to know such excruciating detail about how these people lived and died 3000 years ago, but its not everyday you get to see something that old. (Will people in 3000 years really care so much about how we are currently living?) Anyway, entry into the exhibit also gave access to the rest of the Museum.

If you’ve never been to the Powerhouse Museum, its Sydney’s museum dedicated to technology and applied science. I’d recommend visiting the museum if you’re ever in Sydney. If you’ve stumbled across this website, then I’m sure you’d be interested in the museum’s exhibits.

There are over a dozen good examples of steam powered machinery on display. The most impressive exhibit is a fully operational Boulten and Watt steam engine. Apparently it is the oldest working steam engine in the world. The day I visited, I missed the working demonstration, but I have seen the machine operate previously.

Another steam machine that caught my attention was this small steam power generator. It was once the electrical power supply for a factory. It featured a steam engine prime mover powering a 3 phase generator and a small DC alternator. From what I could see, the DC alternator was powering the generator’s electromagnet.

On loan to the museum is an F1 rocket engine. These were used in the first stage of the Saturn V rocket. This piece of machinery is very large and the exhibit says that the engine was a test engine. It didn’t provide any details about what tests it was used for or if it ever fired, however the engine is still impressive regardless.

Another small piece of Apollo equipment is this Reaction Control System thruster that was used on the Apollo Command Module. This actual component never flew but it was marked as being development hardware. 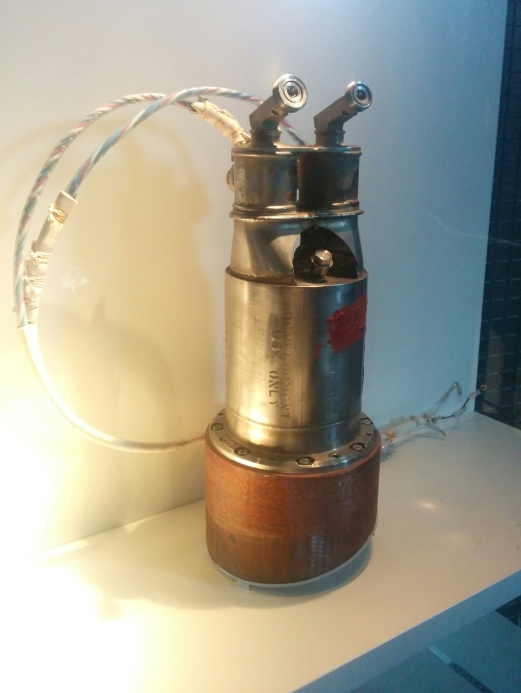 I knew that the Cochlear implant was an Australian invention, however I was unaware that an Australian company, Teletronics, was also involved in the development of the pacemaker. Several years worth of pacemaker models are on display and from what I can see, the early devices are a rather simple piece of equipment.

It appears to be 2 large batteries to provide the power source and some simple analogue circuitry to provide the timing for the electrical impulses that interface to the heart.

As well as the Egyptian Mummies exhibition, there was an exhibition of 3D Printing and CNC technologies. I was unaware that this was on and the name of the exhibition, “Out of Hand: Materialising the Digital”, certainly doesn’t help promote the exhibition.

Personally, I really enjoyed this exhibit.

It provided several excellent examples of the capabilities of 3D Printing and CNC manufacturing to the layperson.

Particularly impressive were some titanium implants that were manufactured using titanium powder and SLS techniques.

Also, there were several exhibits with an art focus. Some of the pieces were cool. Printed Hermit crab shells by Aki Inomata was an original idea. These appear to have been printed on a Formlabs style machine.

One final exhibit that was impressive was the BioPen developed in Wollongong. A surgeon can dispense cell material and growth factors into the patient’s bone. Being in a pen shape, it allows the surgeon to draw the material where it is required.